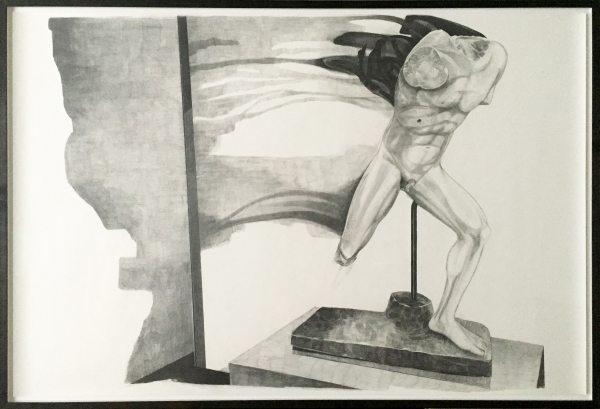 From the very outset, Marc Bauer opted for pencil and eraser to create images that often evince traces of a long history. Before these images were selected by the artist for a continued, enhanced life, they had often already become iconic historical images in their own right. They therefore often form part of the collective social and historical memory, and are used individually or interspersed or mixed with imagery from the personal history of the artist. In short, these are images that have, in one way or another, found the artist. Marc Bauer, in drawing these pictures, attempts to get a grasp on reality.

Marc Bauer makes his drawings in normal or lithographic pencil, on small formats, on large formats, sometimes even as wall drawings, which are integrated into the surrounding architecture. The artist makes it very apparent that the images are ‘mediated’, that they have been translated into a different medium. Most often, they initially came to him as photographs, but are just as well taken from memories. Often, parts of drawings are erased, whereby traces of the effacing are used as the background for a new drawing. The slowness with which the entire process of realisation takes place, is extremely important to Bauer. Drawing creates a mental space for him.

Bauer often conceives his drawings as series and likes to present them as site-specific installations. The disruptive sequences that are created in this way, offer the spectator the opportunity to fill in the empty spaces between the successive images. The viewer is also consciously challenged and positioned somewhere between the image the artist has produced and the memories the image evokes in him. Bauer aims to address an educated spectator, a spectator who cooperates with him.

In the post-media era, in which a concentrated focus on a single medium is no longer considered of the time, Marc Bauer bridges the classical gap between the media of drawing (Disegno) and painting (Colorito), precisely because he has developed a specific pictorial art of drawing.
As mentioned before, many of Marc Bauer’s drawings are created on the basis of photographs. This, however, does not imply that Marc Bauer draws photographs. Instead, he draws his memories of photos. Commenting on the function of memory, the artist states: “It suffices to count to ten and everything becomes a memory.” Photography is about images that are complete, that are set, that are fixed. Drawings, on the other hand, make evident they are the result of a process that has taken place over a period of time. Drawings allow the artist to open up time. The drawings always reveal their state of incompleteness, unfinishedness. His drawings, at times, reveal more about the drawing process than about the subject of the drawing itself.

Marc Bauer draws in black and white, in grey tones. Colour is used sparingly in his work, and always for specific reasons. Not to show colour as such, but rather in order to modulate the emotion of the drawing or the distance to the viewer.
Marc Bauer was born in 1975 in Geneva, Switzerland. He lives and works in Berlin, Germany, and Zürich, Switzerland. He studied at Ecole Supérieure d’Art Visuel in Geneva and at the Rijksakademie van Beeldende Kunsten (State Academy of Fine Arts) in Amsterdam, the Netherlands.

Boy and Jagers in de sneeuw

The Swiss Grand Award for Art / Prix Meret Oppenheim was created in 2001 by the Federal Office of Culture in cooperation with the Federal Art Commission.

The award initiated by GASAG will be presented in the fall of 2020 for the sixth time in cooperation with the Berlinische Galerie.