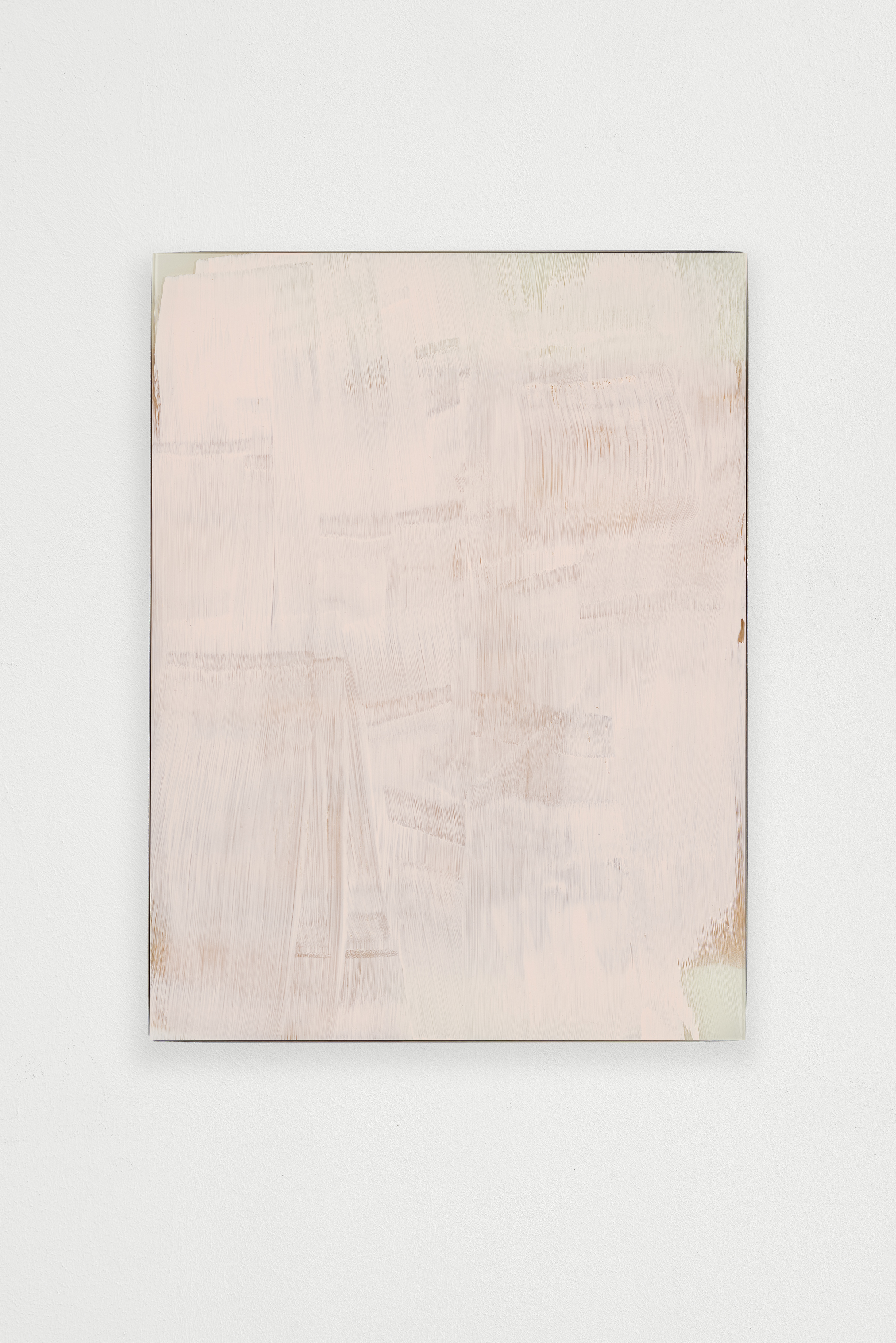 In many respects, the work of German artist THOMAS KRATZ (°1972, Waiblingen, Germany) defies summation. Kratz works across a variety of media, including painting, sculpture and performance art. His work explores the exterior of painting, often by using soft colors on materials other than traditional canvas. The works of Kratz are often playing with the idea of the painting as a mirror, than with the old and traditional idea of the painting as a window to the world. Also the topic of body and skin is frequently present, as the last border between ‘self’ and the ‘other’, between the container of self and the world outside, which nowadays shows itself more and more fragile.

In his earlier “Lick Gin” series, metal pigments, such as manganese and tin, were painted on wood, while his “Nude” series used flesh tones on glass. The resulting paintings turn the viewer into a perceptual participant, captivating their senses with a tangible feeling of absorption. In recent years, his paintings have particularly reflected his intense involvement with images of bodies, with portraits, with a smile, and with depicting human skin tones. These days they appear more minimal, more or less abstract, even occasionally monochromatic.

Thomas Kratz’ paintings substantiate their character as objects by the way they are made. Physical details reveal the manner in which they were realized. Thus, the paintings appear to be more objects than images, meaning they hover somewhere between the two poles of surface and of object. Kratz also creates performance art, sculptures and, more recently, reliefs, which are only at first glance a contradiction to his painting work.

What his paintings and performances have in common is that they require a certain form of perception, oriented not to specific figural form, but rather to the actual experience of viewing them and seeking the particular activity in the picture.

Much in the way Kratz emphasizes the physicality of his paintings, he also incorporates the physical environment and architecture of the places where his work is shown. The exhibition space becomes a pictorial space, either inspired or defined by the color of the space’s walls. Thomas Kratz creates a language of objects and gestures that is highly diverse, but which in its totality speaks of the contingencies and rituals of art.

Thomas Kratz studied new media art at the Hochschule für Gestaltung / ZKM in Karlsruhe, painting at the Academy of Fine Arts in Munich and finished with a master’s in painting from the Royal College of Art in London. In addition to solo shows in Berlin, Catania, Frankfurt, Munich, Lisbon, and London, Kratz had a major solo show at the Bielefelder Kunstverein in 2012 (with catalogue). In September 2015 Deweer Gallery organized his first solo exhibition in Belgium. His most recent group exhibitions include ‘Modern Talk – Günther Förg / Melissa Gordon, Thomas Kratz & George Little’, Deweer Gallery, Otegem, Belgium; Galerie Jahn, Landshut, Germany; GRGLT Giorgio Galotti, Turin, Italy; Horse, Berlin, Germany and CO2, Turin, Italy. In April 2014 his book ‘Head-Lick Gin-Nude’ has been published.

Thomas Kratz is part of the duo exhibition 'Haut Kontakt', with Michael Sailstorfer, at SMAC, Berlin.