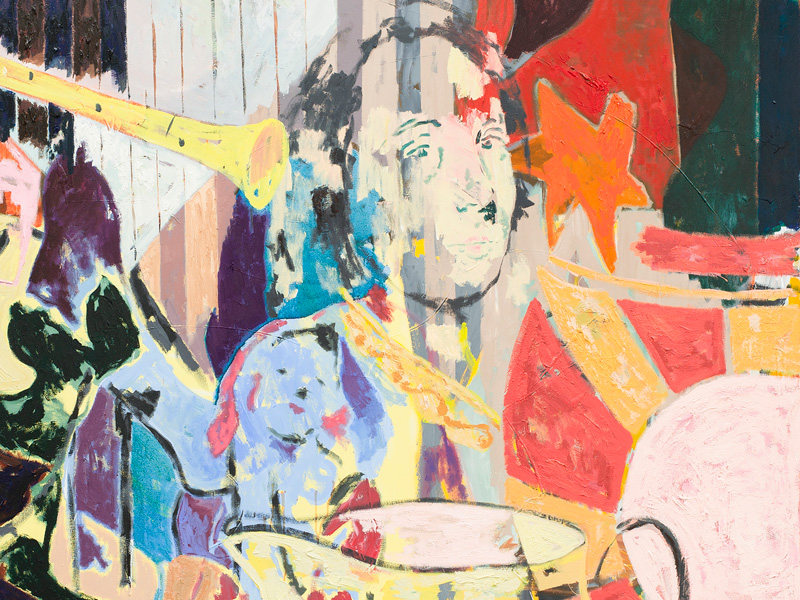 Jon Pilkington’s (°1990, Liverpool, UK, Lives and works in Copenhagen, Denmark) paintings are decisively colourful, dense and intricate: layers on layers and shapes on shapes in unfinished rough brushstrokes give the works a nearly illegible perspective. The artist refuses to succumb to clarity, painting for him is a process of distortion and he is – above all – wary of making anything too determinate.

All his paintings start from loose figurative drawings of ornaments, leaves, odd objects etc. which he combines into a new chaotic world balancing between the figurative and the abstract in which trial and error clearly lead the way. A few sharp boundaries separate the different scenes making the whole appear like a collage of cut-up paintings that were painted at different times. A small trespass here and there proves otherwise and emphasizes the merging of the old and the new, a constant theme throughout Pilkington’s works. Various modernist styles have left their traces on the artist’s visual memory and are experimented with freely. Pilkington plays with the expectations paintings allude to historically and, as a child of his time, wants to question the role of current image making. In his latest paintings old-fashioned porcelain figurines take the lead in an untraceable story, reducing them to the shadows of an elusive past, a forgotten sense of the romantic, a nostalgia that’s been phased out of our contemporary mental reference library.

THOUGHTS ABOUT THINGS, THE BIRD THAT SINGS

THE ATELIER (ANOTHER STRING TO THE BOW)

KETELEER GALLERY is proud to present 'Neither Use, Nor Ornament', its first publication with Jon Pilkington.

Announcing the representation of Jon Pilkington

KETELEER GALLERY is very proud to announce the representation of the English painter Jon Pilkington.