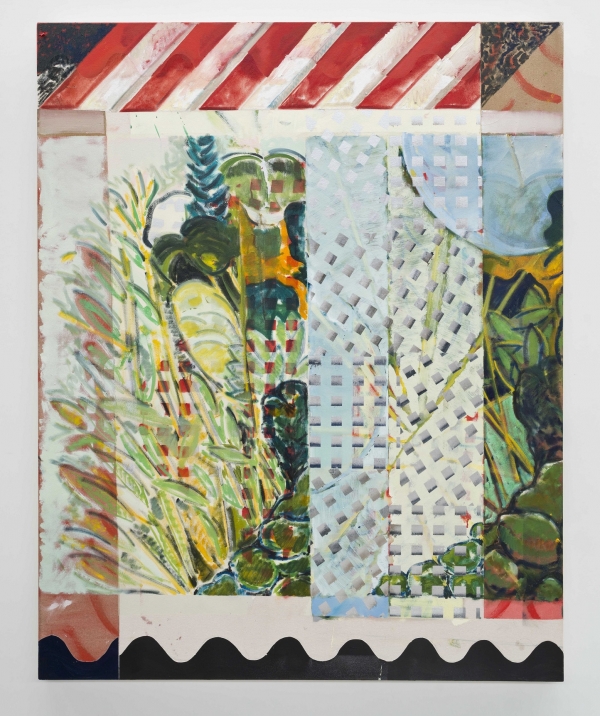 Danish-British artist George Little (° 1988 in Hammersmith, London) seems to have discovered the fruitful metaphorical potential – and lots of other necessary ingredients like color schemes, motives and energy – in the sordid after-modernist decay of restaurant interiors and the iconography related to it. But he does much more; he aims at creating new narrative approaches in painting. He does so, up to now, by organizing a complex yet spontaneous interaction to take place – on the painting and while painting – between the culture of the studio (or perhaps the modernist idea of that studio) and that of the kitchen. Little has observed that these two environments are similar when it comes to strategies of production and presentation. But as sophisticated as this approach may seem, when looking at his paintings one experiences pure poetical energy.

The reputed magazine ArtReview has a section called ‘Future Greats’, in which a leading personality from the artworld is asked to write about a promising artist. In the March 2013 issue, Rosalind Nashashibi proposes a way of looking at George Little’s paintings that fits into this introduction to the work of this fascinating artist: “George Little’s paintings are figurative, abstract and patterned with crowded facades. They are both decorative and modernist, perhaps in the shadow of Matisse (…). They more usually feature the trappings and detritus from restaurants.”

George Little was selected as one of the 20 finalists of the Art Prize CBM (2017), a biennial prize for new talent, in the category of under 30 years. He was nominated for ‘Future Greats’ in ArtReview (2013), won the Nagoya Prize from the Nagoya University (2011) and the Seoul Prize from Seoul University (2011).

The Best Angle For the View

A Pole Turned As a Gesture

Restricted View at Cafe Malaparte I