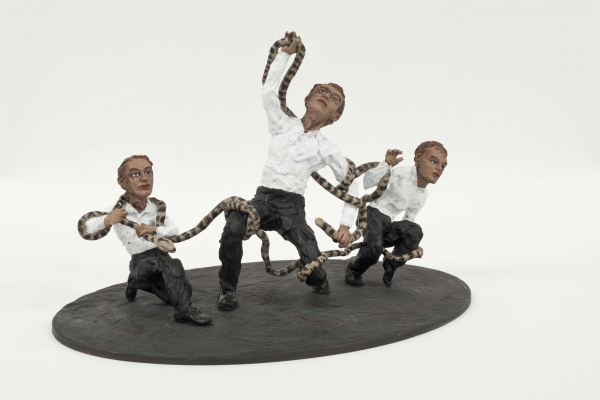 Stephan Balkenhol (°1957. Fritzlar/Hessen, Germany) is a German sculptor whose unique style gained him an inimitable place within the contemporary art world. Balkenhol is mostly known for his ‘dry’ sculptures. Roughly carved, hyper simplistic, anonymous human figures and animals, with a matt layer of paint. Lacking in expression, but not at all empty.

The artist makes big and small standing sculptures, often carved from a single block of wawa or poplar wood, but also 2 dimensional relief panels – portraits and landscapes uniting painting and sculpture – and bronze statues, meant to be able to stand outside. Many of his monumental bronze sculptures can be found in the urban space across the world.

Already during his education at the University of Fine Arts of Hamburg (’76 – ’82), Balkenhol wanted to save figuration from the then prevailing abstract, minimal and conceptual art. But the artist doesn’t want to impose a hidden message on to the figurative. He’s interested in showing the people as they are, their perceivable form and the stuff they’re – literally and figuratively – made of. The direct, seemingly unfinished sculptures come across as quick sketches, fleeting impressions which do justice to the directness with which we generally notice people. The viewer has to fill in the gaps, imbue it with meaning. Fantasy and associations are in the eye of the beholder.

“In my visions my sculptures become a question, a mirror.”

Now and then absurd elements pop up: humans with animal heads, mating couples on antique vases, monumental figures with stretched-out legs… a sense of humour which counteracts the – at first glance – seriousness of Balkenhol’s works, emphasizing instead the artist’s overall playfulness. Man is never reduced to banality however, on the contrary, the mundanity of Balkenhol’s characters are in honour of the intrinsic value of man.

A selection of important solo shows of Stephan Balkenhol: Kunsthalle Emden, Germany (2018), Centro de Arte Contemporáneo de Málaga, Spain (2018), the MMOMA – Moscow Museum of Modern Art, Russia (2016), the Fondation Fernet-Branca, Saint-Louis, France (May 2016), the Leopold-Hoesch-Museum, Düren, Germany (2015), the Landesgalerie Linz, Austria (2014-2015), the Kunstmuseum Ravensburg, Germany (2014), the St. Elizabeth Church in Kassel, Germany (2012), the Musée de Grenoble, France (2010), the Deichtorhallen in Hamburg, Germany (2009), the National Museum of Art Osaka, Japan (2005) and the Sprengel Museum in Hanover, Germany (2003). In 2006-2007, an extensive exhibition of his work travelled from the Staatliche Kunsthalle Baden-Baden, Germany to the MKM Museum Küppersmühle für Moderne Kunst, Duisburg, Germany and on to the Museum der Moderne Salzburg Mönchsberg, Austria. Deweer Gallery has been presenting solo exhibitions by Stephan Balkenhol since as early as 1987. In 2017 Deweer Gallery organised a solo exhibition ‘30 Years Stephan Balkenhol & Deweer Gallery – A Brilliant Story Since 1987’, to celebrate not only a productive collaboration, but a deep friendship.

Although Stephan Balkenhol is mostly known for his figurative wooden sculptures, many of his monumental bronze sculptures can be found in the urban public space – in cities as Berlin, Chicago, Johannesburg, Courtray, London, Paris and Salzburg. Sculptures of the internationally renowned artist are included in major museum and private collections worldwide, in M HKA – Museum of Contemporary Art, Antwerp, the Neue Nationalgalerie in Berlin and the Hirshhorn Museum and Sculpture Garden in Washington, US. amongst others.

Lehmbruck Museum presents a comprehensive solo exhibtion by Stephan Balkenhol, developed in close collaboration with the artist himself.

Stephan Balkenhol & Fabien Mérelle at ‘A summer in Le Havre’