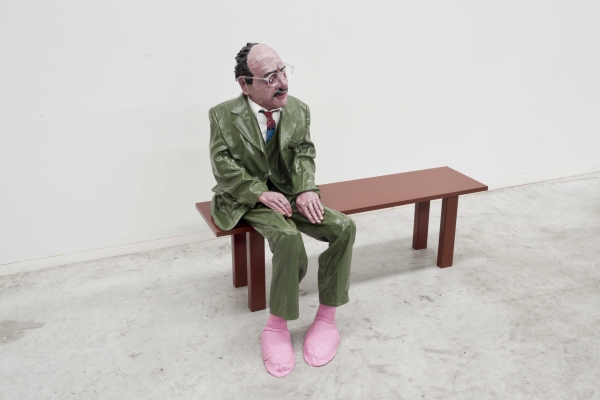 Enrique Marty’s (°1969 in Salamanca, Spain) oeuvre consists of sculptures, paintings, watercolours, videos and animations. As a whole, it reads as an exploration of the human soul. Stylistically, Marty finds his source in the characteristics of amateur imagery, mass communication and popular narrative techniques, while his methodology is based on the endless recording and reproduction of private experiences and everyday life. The artist does not interpret, but rather records. Marty’s work is sort of an encyclopedia of the so-called everyday life, a comédie humaine with dark passages. On the one hand Enrique Marty’s sculptures are three-dimensional portraits, based on moulds of real people. Yet they also connect doll-like aspects to those of statues of Western figurative sculptural traditions, including the Baroque.

Enrique Marty’s unique approach attracted great attention for the first time in Spain with his solo show ‘La Familia’ in Espacio Uno, the then space for young art of the Reina Sofia Museum in Madrid, in 2001. In 2004, Harald Szeemann selected him for ‘The Real Royal Trip’, in which Szeemann introduced the contemporary art of the Spanish-speaking countries on the international scene. The exhibition travelled from PS1 New York to the Museo Patio Herreriano in Valladolid. Marty became one of the most outstanding personalities in Spanish contemporary art, which led to a sensational solo exhibition in the MUSAC in Leon in 2006: ‘Flaschengeist / La Caseta del Alemàn’, curated by Rafael Doctor Roncero. Shortly afterwards, Enrique Marty was first shown, still in 2006, in Belgium by Deweer Gallery, with the solo show ‘Aim at the Brood!’. The cooperation with Deweer Gallery led to institutional solos at the GEM / Gemeentemuseum Den Haag (2008), the Kunsthalle Mannheim (2010), and the Fundacion Antonio Perez in Cuenca, Spain (2011). After ‘Dank and Dismal’ in 2009, he brought his third solo show ‘Sainte Guillotine’ at Deweer Gallery in 2010. In 2011, the gallery presented Marty solo at Art Brussels with the installation ‘Art Is Dangerous’. The artist’s fourth solo show at Deweer, ‘Soft Cockney’, was presented, together with an eponymous catalogue, in 2013.

Marty took part in several important group shows, including the Venice Biennale in 2001 and 2005. He was selected for the exhibition on Spanish post-war art ‘Spain. 1957-2007’, in the Palazzo Sant’Elia (Palermo, Italy), for ‘L’Art en Europe’ in the Domaine Pommery (Reims, France, 2008), for ‘Spanish Video Art’ at ZKM in Karlsruhe (2008), and ‘Hareng Saur – Ensor and Contemporary Art’ at S.M.A.K. and Museum of Fine Arts, Ghent (2010), among others. In 2011, he took part in the group exhibition ‘GOLD MINE’, with works from the collection of Sirje and Michael Gold, at CSULB, Long Beach, USA.