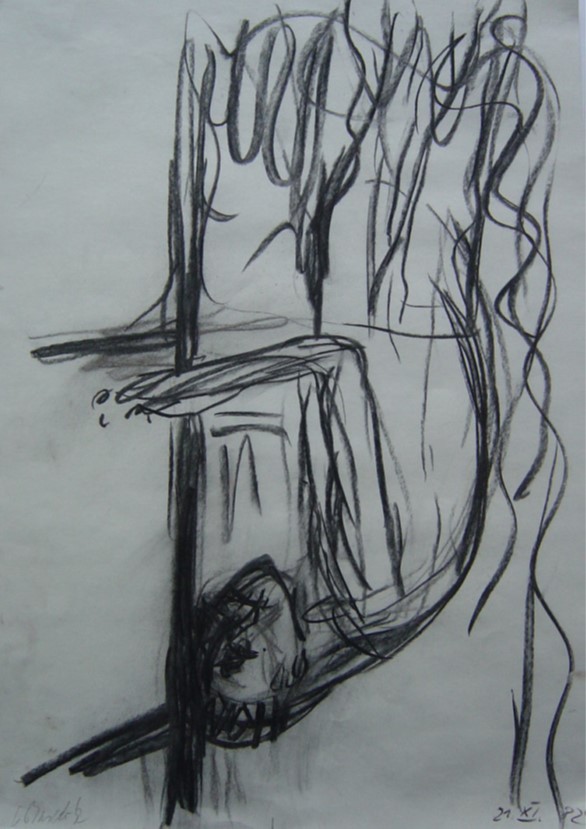 GEORG BASELITZ (born in 1938 as Hans-Georg Kern in Deutschbaselitz/Saxony, Germany) is known worldwide as the painter of inversed motives. After a strongly programmatic start in the 60s, in which the artist wanted to change the world with his art, and during the winter of 1968-1969, Baselitz comes to his typical inversed figuration. Since the 80s he is considered as one of the most important artists of the New German Painting and of the Post-Modern era in general.

The deliberately inversed figuration of Baselitz stands for his will to distance himself from reality, as to state most explicitly that any representation of a figure is always misleading when it comes to get to know the reality in that way. Illusion has no longer a chance, pure imitation is considered meaningless. It is Baselitz’s way to break with the tradition of mimetic art that reigned for centuries. Baselitz wants to realize an interesting composition and concentration of visual means (with paint, ink, charcoal, colour, surface, lines, …) on a canvas, on a sheet of paper, in a sculpture. At once he breaks with this typical Western idea that quality and progress can only be achieved by permanent innovation. For Baselitz the repetition of an experience does not inherently lead to its diminished authenticity. It is a conviction that allows him to develop extended series of works based on the same motive.

In the famous barometer of fame, ‘Kunstkompass’, published by Manager Magazin in 2012, we find Georg Baselitz on the third position of the Top 100 ranking of living visual artists. But even without this reference it should be clear that Baselitz accounts for one of the greatest artists of the past century.