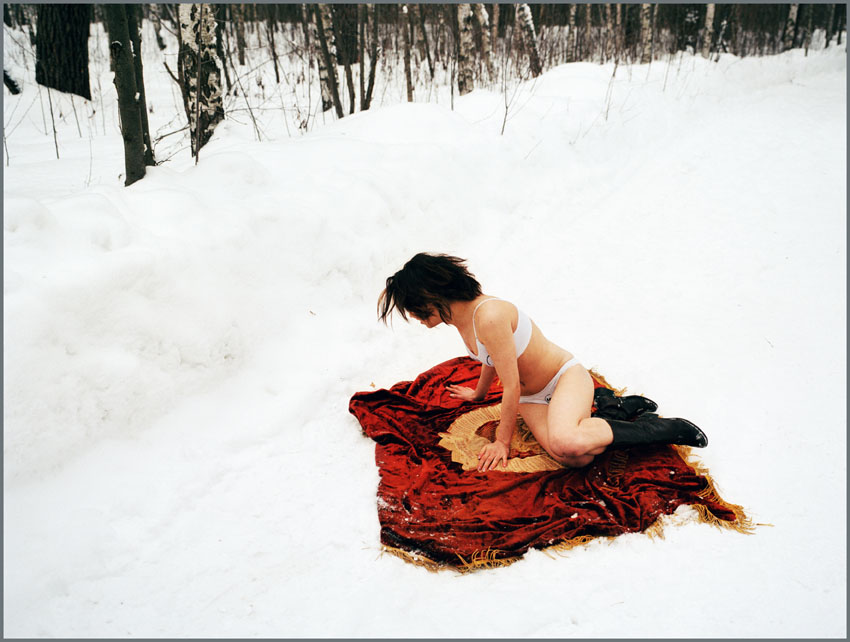 Like no other, SERGEY BRATKOV (°1960. Kharkov, Ukrain) has managed to record the social vacuum of a state in transition. Born as a Soviet citizen in the republic of Ukraine, he witnesses the collapse of the communist Soviet Union and the almost violent, anarchic transition of his country and its people from planned economy to global, neoliberal capitalism. Together with Boris Mikhailov, Sergey Bratkov is the foremost photographer and artist of this historical turning point and the way it expresses itself on an everyday human level.
As an artist, Sergey Bratkov expresses himself through photos, videos and installations; the installations, often including elements of the exhibition structure, are stagings that add a particular artistic value to the photos and videos they present. The viewing of pictures and videos in a single installation, in other words, of static and dynamic images at the same time, makes that the visitor loses his sense of time. Bratkov’s images are often developed on a large format, on canvas, or realised as a light box.

After Deweer Gallery introduced Sergey Bratkov in its anniversary exhibition “ECLiPS “ (2004), the artist had solo-exhibitions in Otegem, in 2006 (with catalogue), and in 2010. His main institutional solo shows were organized by S.M.A.K. – Museum of Contemporary Art (Ghent, 2005), by the Moscow Museum of Contemporary Art (2006), by the Baltic Centre for the Arts (Gateshead, UK, 2007), the Photo Museum Winterthur (Switzerland, 2008), by Pinchuk Art Centre in Kiev, Ukraine and the Deichtorhallen Hamburg (2010) and Red October, Moscow (2012). Sergey Bratkov further took part in the 4th Moscow Biennale of Contemporary Art (2011), the 54th Venice Biennale (2011) and “Futurology” (Center for Contemporary Culture GARAGE, Moscow, 2010).

Midday in Shargorod (N°20 from the project UKRAINE)