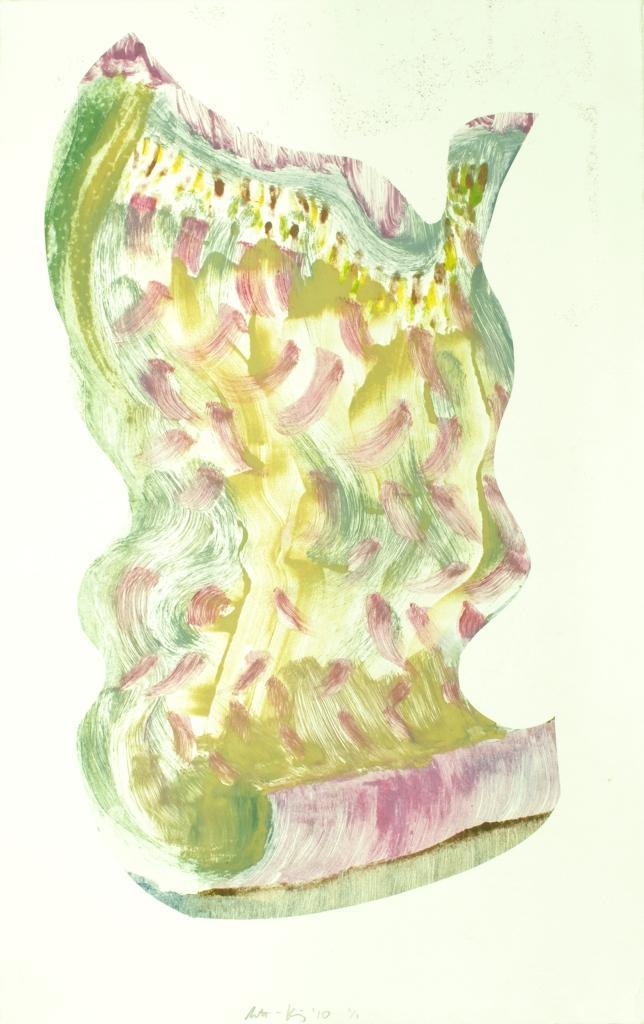 MATTHEW LUTZ-KINOY‘s (°1984, Brooklyn, NYC, USA) working method is collaborative and interdisciplinary. His projects are radically expressive and personal, and despite their enormous vitality they also thoroughly investigate the moments in the recent Western tradition when this attitude was considered possible as an artistic approach. They are expressed through various media, including dance, sculptural installation, graphics, publications, video and painting.

Lutz-Kinoy explained in an unpublished discussion from 2011: “In the ’80s – at least in New York – expressionism in the visual arts was not considered a ‘high’ style (…). This brought about some kind of collapse of authenticity in art and led to a lack of personality and vision (…). As a child of the 80s, I return to this point in my work. My interest goes to the return of an expressive authenticity. It is some kind of action, in dance/performance, that is based on the heritage of this collapse of the expressive. Admitting that you produce something with affect and allowing yourself as a performer to give into your own relationship with these symbols. To approach affect from a personal position.”

Matthew Lutz-Kinoy’s first solo exhibitions take place at Galerie Yukiko Kawase, Paris (2005-2010). The solo show ‘Say it with flowers’(2011) at Deweer Gallery is his first exhibition in Belgium. Still in 2011 the artist exhibits with Silberkuppe, Berlin. In 2012 Lutz-Kinoy presents the performance-exhibition ‘Keramikos 2 – The Traveling Dinner Party’ at Elaine’s @ Museum für Gegenwartskunst, Basel, Switzerland. That same year he also exhibits together with Martijn Hendriks at W139, Amsterdam. In 2013 he is solo at Outpost Studios, Norwich, England, UK.

Screenings of films by Matthew Lutz-Kinoy are on view at Whitechapel, London (2010), Kölnischer Kunstverein, Cologne and New Museum, New York (2009). His most recent dance performance is “Donna Haraway’s Expanded Benefits Package” (with SOPHIE and Chelsea Culp), which performs on September 16, 2011, at the New Museum Theater in New York. In September 2012, Lutz-Kinoy participates at the group show “Beyond Imagination” at the Stedelijk Museum, Amsterdam. In 2013 Deweer Gallery schedules his second solo-exhibition ‘Meadows on the grid float and a playlist, a collaboration with Dena Yago’.