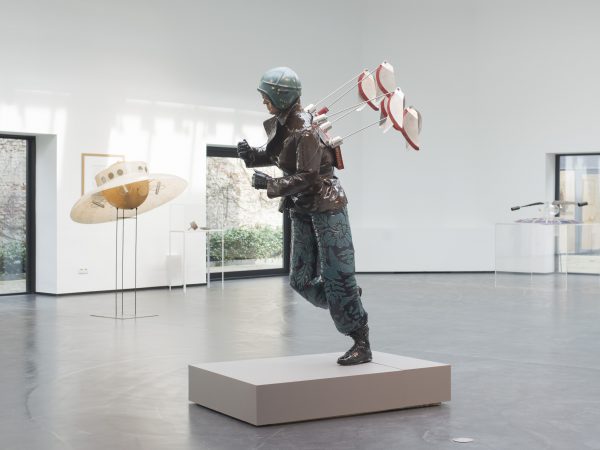 PANAMARENKO (1940 – 2019. Antwerp, Belgium) was an extraordinary, inimitable artist within the Belgian and international art scene. Henri Van Herwegen, Panamarenko’s given name, derived his mysteriously sounding artist name from a Russian general whose name he heard in 1958 over his self-made transistor radio on which he was able to receive a Potsdam (then part of the DDR) radio station. He thought the name sounded good and from 1965 it became his permanent pseudonym.

As an artist, – engineer, – physicist, – inventor and – visionary, Panamarenko conducted exceptional research into fields such as space, movement, flight and gravity. His work is a combination of artistic and technological experiments, an attitude he undoubtedly inherited from his architect father, and takes on various forms: airplanes, balloons, submarines, cars, flying carpets, birds … each time spectacular constructions of unconventional beauty, at the same playful and impressive.

Panamarenko is also known for the fact that his contraptions usually don’t work. It is the dream of flying, diving,… that we are looking at. The experiment matters more than the result. His Donnariet (2003) submarine, for example, can’t really dive, it’s more like an underwater pedalo which is powered by pedalling with your feet.

Panamarenko’s works are an example of an immeasurable fascination for the design process, a fanatic an inspired exploration of what is possible. The work Turbo Jet Aladin (1987) is one of the many Pastille Motors he worked on. This was a series of round, flat fans ( which reminded him of aspirins, a ‘pastille’) with floating baffles, test models of drive mechanisms for his Rucksackflugs. These backpack aircrafts are part of his Portable Air Transport (P.A.T.) theme which he worked on since 1969. The Pastille Motors were one of the many steps in his research into flying as efficiently as possible, with as little fuel consumption as possible, a reaction to NASA’s wasteful design.

Every possible way a person can “fly” – over land, under water, in the sky and in outer space – is Panamarenko’s best known, though not only, subject and is the first thing to come to mind when we hear or read his name. Aeromodeller (1969 -71) which appeared in The Collection (1) | Highlights for a Future exhibition at the M.S.K., Ghent, was probably the most impressive example of this.

Smaller, but no less poetic, airships, such as the Aeromodeller (1984), emerge throughout his oeuvre and stem from the 1968 manifesto by the “Vrije Aktie Groep Antwerpen” (free action group Antwerp) of which the artist was a member. On the Conscienceplein (a square in front of the Hendrik Conscience church) of Antwerp they proposed the utopian plan for a “reserve” in which the residents would, among other things, build zeppelins allowing them to fly around freely, and in a completely safe way, Panamarenko added: filled with helium instead of hydrogen.

With his flying saucers and magnetic spaceships, Panamarenko pushed the boundary of improbability even more. From 1976 on, he became fascinated by the infamous stories that circulated from people who claimed they saw UFOs and had come into contact with extra-terrestrials. He started designing a whole series of saucers that would be able to fly with the use of magnetic force fields, as well as a number of devices that would travel through space on magnetic “cosmic motorways”.

In 2005, after the retrospective exhibition Flying saucers and Devil Rowlers Motorcycle Club at the Royal Museum for Fine Arts Brussels, Panamarenko stopped making art to live in a quieter way with his wife Eveline at their farmhouse in Michelbeke.

Panamarenko’s oeuvre is a laudable homage to human fantasy and ingenuity. Inspired by Joseph Beuys’ view on art, he refused to define “art” in a determined way, it’s the terrain that can (or should) always be in motion.

Scotch Gambit – From Fable to Stee