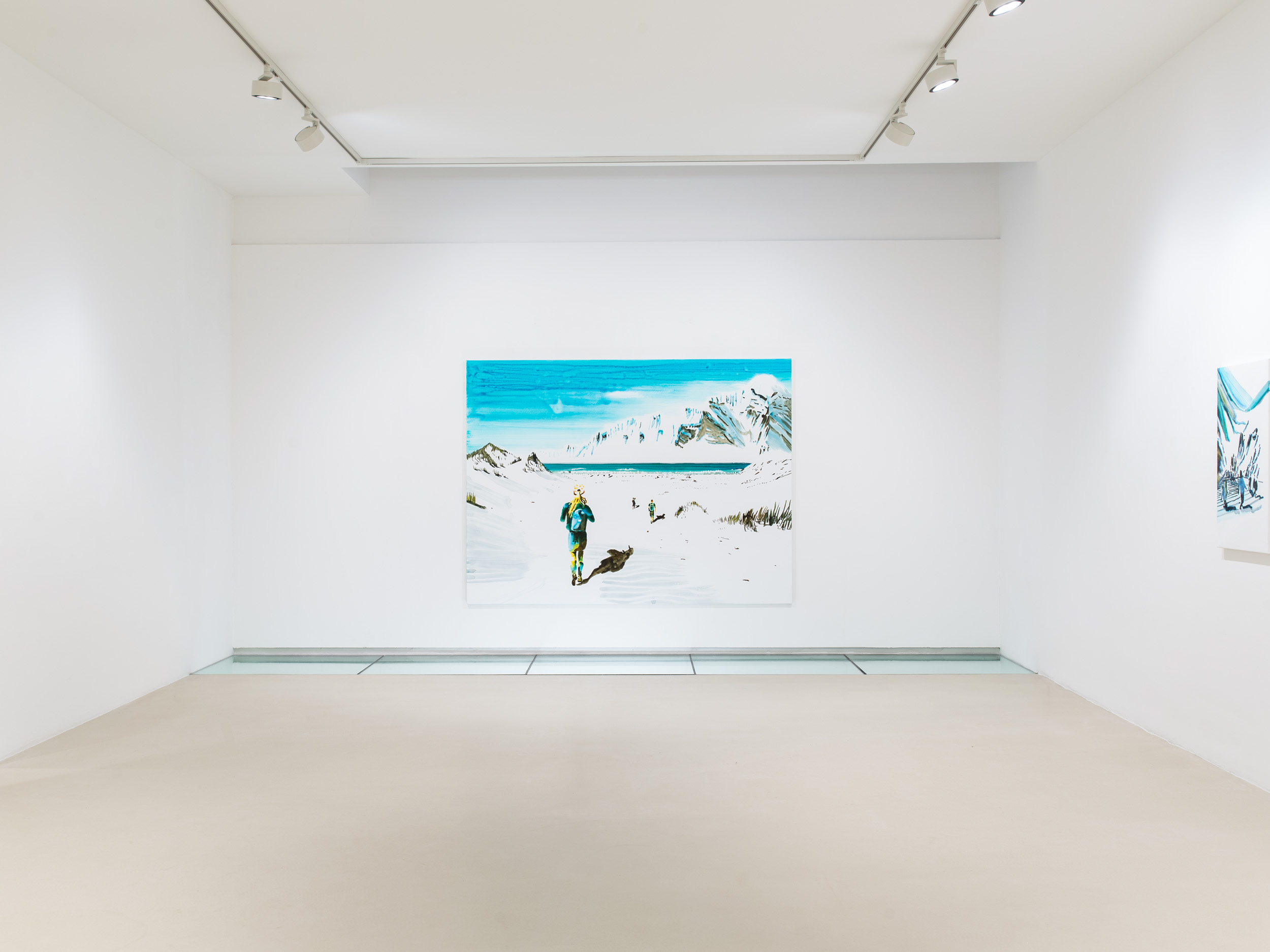 JOHN KØRNER (°1967. Aarhus, Denmark.) is one of the most prominent contemporary artists in Denmark. His work is not easily pigeonholed. In the past two decades, the Danish artist has steadily developed a body of work characterized by expressive colors in acrylic paint on canvas. In addition, he also creates shiny ceramics, glass objects and installations. Basso continuo is a very direct form of communication. Kørner, who graduated from the Royal Danish Academy of Fine Arts in Copenhagen in 1998, is, together with several of his contemporaries, a key figure in the revival of painting since the end of the nineties.

Central to John Kørner’s artistic universe are his ‘Problems’, which he visualizes in a distinct, abstract manner, by painting egg-shaped blot marks or sculpting objects in a similar shape. Some are arranged in rows, as if they were notes on a musical stave. Some are monochrome black, but most are colorful, with hues ranging from psychedelic yellow to purple. According to John Kørner, the role of art is to point out problems, without providing solutions. The ‘Problems’ he refers to are large-scale, society-related problems and challenges, such as war and prostitution.
In his series ‘War Problems’ (2008) for example, John Kørner focuses, in a reaction to political rhetoric, on Danish casualties that resulted from the country’s participation in the ‘War on Terrorism’ in Afghanistan (2002-2009). The titles of the paintings are the names of Danish soldiers that died during this war. Yet also victims of human trafficking and prostitution in Denmark are thematized in John Kørner’s work, as in his series ‘Women for Sale’ (2010). The abused women – whose names are again present in the title – have been depicted in natural, relaxed poses, as independent women.

Remarkable is also Kørner’s fascination with open landscapes and unobstructed views, which can either be inviting or disorientating, and his references to water, for example in the form of a huge devastating tidal wave. This interest is embedded in the DNA of the artist’s family, going back to Kørner’s great-grandfather, who was a boat builder. It also refers to a childhood memory of the artist, more specific his attempts as a child to walk on a frozen sea, with hummocks of ice that had formed into miniature icebergs.
The role of sport and its specific aesthetic, finally, is also an important facet in the oeuvre of John Kørner. Sneakers for example are a recurrent motif in his canvases. The artist explores sport as a social phenomenon that affects fashion, as well as body and gender issues.
***
John Kørner studied from 1992 to 1998 at the Royal Danish Academy of Fine Arts in Copenhagen, Denmark. In 2018 he also has solo exhibitions at Museum Dhondt-Dhaenens, Deurle, Belgium (25.03 – 17.06) and at EMMA – Espoo, Museum of Modern Art, Espoo, Finland (14.02 – 29.07). He recently had solo shows in Charlottenborg in Copenhagen, Denmark (2017); Dunkers Kulturhus, Helsingborg, Sweden (2016); Munkeruphus, Dronningmølle, Denmark (2016), Odense, Denmark (2016), Vejle Kunstmuseum, Vejle, Denmark (2016), Museum Belvédère, Heerenveen-Oranjewoud, the Netherlands (2016), Kastrupgårdsamlingen, Copenhagen, Denmark (2015), Odsherred Kunstmuseum, Asnæs, Denmark (2015), Herning Museum of Contemporary Art, Herning, Denmark (2013), The Workers’ Museum, Copenhagen, Denmark (2011) and Moderna, Moderna Museet, Stockholm, Sweden (2005).
He has participated in group exhibitions in, amongst others, J. F. Willumsens Museum, Frederikssund, Denmark (2015), Skagens Museum, Skagen, Denmark (2015), Lyonel Feininger Galerie, Germany (2015), Artipelag, Stockholm, Sweden (2014), Nordic Contemporary, Paris, France (2014), Scandinavian Institute, New York, U.S.A. (2014), The Hole, New York, U.S.A. (2013), Palais De Tokyo, Paris, France (2012), Hamburger Bahnhof, Berlin, Germany (2011), Tate, London, U.K. (2010) and Malmö Konsthall, Sweden (2008).
His work is in public and private collections such as ARoS, Århus Museum of Art, Denmark, Arken, Museum of Modern Art, Denmark, Royal Museum of Fine Arts, Copenhagen, Denmark, Tate Gallery, Londen, U.K., The Saatchi Collection, London, U.K., Herning Museum of Art, Denmark, Rubell Family Collection, Miami, U.S.A., Collection Cooreman, Belgium.

Making the Way Through the Mountain

Down Towards the Beach

Running on the Pier

The Door Is Open

Prevented Way Towards the Door

Touring Under the Bridge Between Mountains

TALKING TO A MOUNTAIN

Spot a Box of Tomatoes

Alone With the Architects

Action on the Escalator