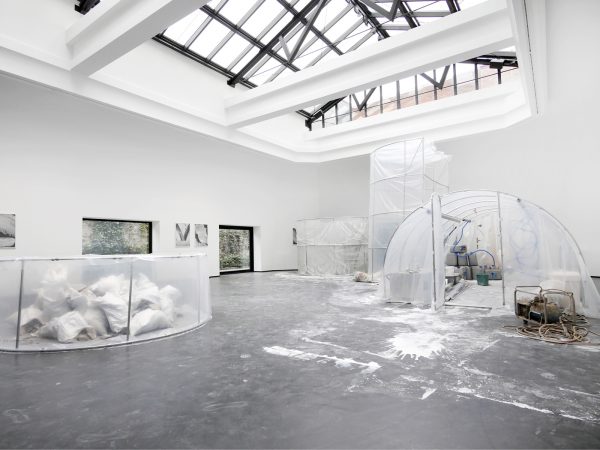 Since 2006, Philippe Van Wolputte has been very productive in exploring urban landscapes, staging performances, recording these performances and building installations in various galleries and museums. Prior to his formal education, his focus was already set on what is still the main topic of his artistic explorations: abandoned, forgotten, but most of all devalued urban locations awaiting demolition as they no longer serve a purpose in the current economical/utilitarian hierarchy. Sometimes he reclaims these sites by repurposing them as ‘Temporary Penetrable Exhibition Spaces’ (TPEF), or by marking them with a distinct grid. Other times he re-uses and re-activates these sites by creating his own pathways through what appeared to be nearly fossilized, inert spaces.

By documenting these actions (via photography and video recordings) he takes us on a journey where it is unclear where we are going and what we are looking for and therefore reminds us of the strong associative effect architecture has on us. Crawling through dark corridors, breaking through walls, inhaling the dust of the past, … makes it all very clear, these places haven’t completely died yet. Their silence, on the contrary, bears witness to the innumerable voices of lives and realities passed.

Van Wolputte uses a distinct aesthetic, reminiscent of ‘60s and ‘70s performance pieces, purposely and ironically romanticizing his artistic practices and lending them a, be it constructed, urban melancholia. He never tells the whole story. He won’t give us a clear view of what lies behind his practice and plays a dubious game of uncovering and hiding, colliding the past with the present, claiming no new truths but turning old ones inside out.

Philippe Van Wolputte presents a new intervention @ SECONDroom, Antwerp. The work will be presented on October 26st from 6-9 pm.

Philippe Van Wolputte will present a new installation at GALLERY GALLERY which functions as a film set for a future video work of which the viewer will become a part of, depending on their urge for a drink during their visit.

On the occasion of the collection of GAGARIN magazine's entire oeuvre in one box, a selection of short films will be screened at Cinema Zuid.

Philippe Van Wolputte explored the area  and proposes five gestures to experience the city from an alternative viewpoint.