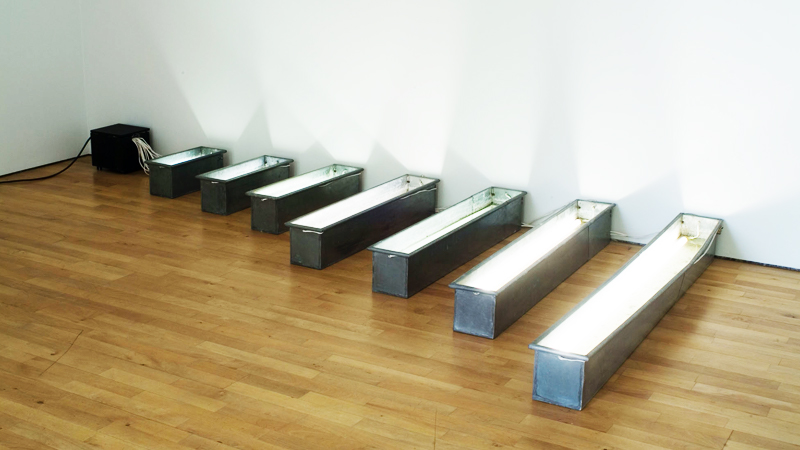 LEO COPERS (° 1947, Ghent) is mostly known for his sculptures, installations and performances, and has since the beginning of his artistic practice obtained a unique place in the Belgian art scene.

Going against the tide, Copers started to reintroduce metaphors and symbols into a visually conceptual practice. By using antagonistic objects, in surreal and alienating combinations, he aims at creating tensions, both figuratively and literally. His objects and installations are on – and often over – the edge of being alarmingly dangerous and destructive and thus challenge our built-in expectations in a very visceral way. Water, fire and electricity for example are often connected in a way that makes us cringe with fear while being moved by its poetic beauty. On the verge of danger, on the edge of life.

For Copers the material results and their effect on the audience are superior to the mere thought process from which the work originated. He leaves behind the sterile, uninvolved conceptual art of his peers.

His work can be seen as a link between the minimalist visual language of his generation, fluxus and the Belgian legacy of anti-establishment irony and poetic surrealism.

In 2018 the leading Belgian art institutes S.M.A.K. Ghent, M HKA Antwerp, Middelheimmuseum Antwerp and BOZAR Brussels, celebrated Leo Coper’s 50th anniversary as an artist with unique solo exhibitions and the publication of a new book ‘Leo Copers, Dreams are made of this’, the most detailed overview of his work so far.

LEO COPERS at M HKA (BE) with NICC

On October 13th, 3pm, we're pleased to invite you to the artist talk with Leo Copers and Ory Dessau who wrote 9 texts on the multifaceted oeuvre of Leo Copers, published in Leo Copers book ‘Dreams are Made of This’.

Moving to a new location!

We are very excited to announce that on September 7th we will open our new gallery space in Antwerp with the first solo show by Leo Copers.

Leo Copers at ‘Art in the Park’ by INNOCOM (BE)

Leo Copers' work was selected for a solo exhibition for the annual 'Art in the Park event' hosted by INNOCOM, Beerzel.

LEO COPERS in ‘FEAST OF FOOLS. Bruegel rediscovered’ at KASTEEL VAN GAASBEEK (BE)

Leo Copers at CcStrombeek (BE)

KETELEER GALLERY at Art Brussels 2019 (BE)

KETELEER Gallery is proud to announce its first participation at Art Brussels37th, the international art fair in Brussels, Belgium.

Leo Copers – Once Upon a Time …

Leo Copers – Dreams are Made of This